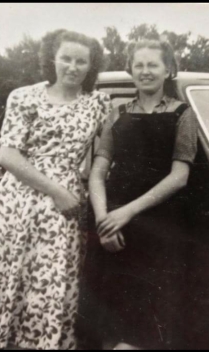 In the days of letters and phone calls and the absence of text messaging, emails and Skype, my aunty Teresa was still a principal character in my life. She and Brendan made their life together in Springfield, in the middle of the emigrant community from West Kerry, socialising in the John Boyle O’Reilly Club and returning home at regular intervals. For visits. Only ever for visits.

I always had this image of her in an American style pinny – of which many were gifted to us – in a flurry of baking and cooking. That probably bears no resemblance to reality but I like that image nonetheless. It is based on the number of recipes she gave my mum and the fact that she was a nice, gentle, lady.

Cherries? I love them. When I was little, they were the only thing among the dried fruit mix that I would venture near. But they weren’t dried but rather plumped up with sugar. Glazed cherries appeared in so many cakes and breads. There were no fresh cherries to be had and my first encounter with those was in the Schwartzwalder Cake which adorned the menu in Jury’s Hotel, Ballsbridge. On all other menus it was Black Forest Gateau but that’s me. Always leaning towards the more exotic!

This is a plainer cake but still one I really like.

Method
1. Pre heat the oven to 220 degrees
2. Roughly chop the cherries and coat thoroughly with a little flour. Set aside
3. Cream the butter and sugar together until pale
4. Drop in one egg at a time and mix well
5. Add a little flour at a time and beat well
6. Continue one egg, some flour and beat until those ingredients are gone
7. Add the cherries to the cake mix
8. Turn into a cake tin which has been lined with greaseproof paper
9. Bake in a very hot oven for ten minutes or less
10. Drop the heat to a 180 degrees and bake for 1 ½ hours (this cooking time includes the first 10 minutes)
12. Check the centre with a skewer to see if it comes out clean
13. Turn onto a wire rack and leave to cool