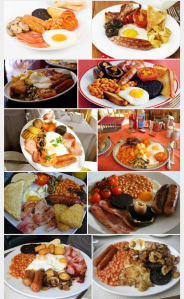 The very words conjure up memories of delicious cooking smells wafting from the kitchen to make taste buds explode and then salivate. The sizzle of the sausage, the crisping of the bacon, the popping of the toast…it’s all there. A rare treat in some houses, a daily occurrence in others – whichever it is, the Cooked Breakfast is a treasured institution in Ireland, the United Kingdom and beyond.

In our home, the Cooked Breakfast is an occasional weekend treat. The essential ingredients, apart from what is served on the plate, are oodles of Sunday newspapers and pots of freshly brewed coffee. Simply bliss! But where did this notion of cooking breakfast come from? Who decided to put all these ingredients together and serve them as breakfast fare?

That would be Mrs Isabella Beeton. In her 1861 Book of Household Management, she provided a list of items which could be cooked and served at a Breakfast Buffet – from bacon and eggs to broiled fish to devilled kidneys to kippers and of course, Kedgeree to name but a few. Such a spread was the delicious delicacies of royalty and gentry – something minions could merely dream of.

It wasn’t until the period after World War Two that the joy of a Cooked Breakfast truly extended to the masses. With the growing popularity of tourism, bacon and its accompaniments became standard fare in guesthouses the length and breadth of the country. Not limited simply to Ireland and the United Kingdom – its popularity quickly spread to countries where Anglo influence is felt – Canada, Australia, New Zealand and the US.

Calling it a ‘Cooked Breakfast’ is rather a description than the true name. It has others – the Full Breakfast, the All-Day Breakfast, the Full Monty and the good old Fry Up. Whichever name used, expectations of what ends up on the plate, however, differ by region.

In the traditional breakfast, there are ingredients common to all. Back bacon, a couple of fried eggs and sausages, flavoured with either brown sauce or tomato ketchup, accompanied by some type of bread and all washed down with anything from instant coffee to freshly brewed coffee to tea in a dainty china cup to a whopping great mug of Builder’s Tea. The addition of cooked tomato, baked beans and mushrooms came later. There is still some contention about whether or not they truly belong but as the saying goes, ‘the proof of the pudding is in the eating…’

So that’s the common ground. Each region has its added extras. In England, fried bread may make an appearance while freshly cooked tomatoes may be swapped in certain parts for their poor relation – the tinned variety. In Ireland, both black and white pudding will join the others on the plate. In Scotland, white pudding may also feature alongside Lorne Sausage and Haggis. The great Ulster Fry, so revered it was voted most popular regional dish, includes potato bread dripping with butter and fried bread. This is not the white bread of the English fried variety but often a soda farl, snipped in two and cooked in the same fat as the meal (the farl is known as a ‘fadge’ in certain areas of Northern Ireland). In this litany of added extras, it is the Welsh version which stands out as truly unique. Often including Laverbread or ‘bara lawr’ (seaweed puree mixed with oatmeal and fried), bacon and eggs can also be accompanied by cockles for a true ‘surf’ and ‘turf’ combination.

Whatever variety chosen, a Cooked Breakfast is truly magical. It can act like a giant hug after a late night out on the tiles. It can provide sustenance and soakage. It can form the basis of a meal with family and friends. Or simply, it can ooze nostalgia by placing you back in the kitchen of a loved one. Not many dishes score on all these fronts.

What then of the beloved Breakfast Roll? A full cooked breakfast served in a crusted roll – available from a petrol station and convenience store near you. Legend has it that, as the Irish economy boomed, people had to move further and further from the city centre to find affordable housing. They came early to beat the traffic and to find free parking, often sleeping in their cars for the last hour or two. The Breakfast Roll was created to provide sustenance to such early travellers who would happily munch them on the way into work. As the economy plummeted, so too did sales of the beloved Breakfast Roll. Forget the economists and other fiscal expects. It is now possible to assess economic fluctuations by the number of cranes present on the skyline and the rise and fall of sales of the Breakfast Roll. Who knew?

Traditional ingredients in the Cooked Breakfast are now being changed around to adapt to different tastes. Eggs may no longer be fried but poached, baked, scrambled. Bacon can be back, streaky, smoked or green. And sausages can be pork or beef. Pudding? Well, it’s always best not to ask about pudding – delicious until you know what it’s made of. Arguments are rife too – should eggs be ‘sunny side up’ or ‘over easy’? Should bacon be cooked perfectly or cremated to within a millimetre of disintegration? Should baked beans feature or be banished? Resolving those heady issues can be part of the fun of eating with friends.

The rise in health consciousness impacts on the traditional breakfast and the way it is prepared. Instead of being fried in stages in the same grease and pan, parts are now reduced in fat content in their production and/or by grilling them separately. Lard and butter are often replaced by lighter, healthier, oils such as olive and sunflower. Fried bread is often displaced by wads of brown soda bread or freshly made toast. All this combines not only to slightly change the taste of the finished dish but also to relieve much of the guilt previously associated with it.

Changing cooking methods and increasing quality of food stuffs mean that people are determined to keep the Cooked Breakfast for many years to come. Whatever the region, this simple dish is treasured.