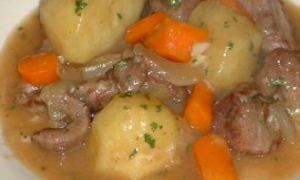 My friend’s niece arrived in Dublin and declared she would like to eat ‘Irish food’. That very thought strikes horror in most people as traditional Irish food can be quite bland. In many recipes, there is an over reliance on offal or they consist of boiled meat.

For me, the notion of ‘Irish food’ conjures up images ranging from ‘Packet and Tripe’ (a Limerick dish of blood sausage and the lining of a cow’s stomach cooked in milk) and stuffed lamb’s heart to boiled bacon, corned beef or mutton. Some of it I actually love but as I am no fan of offal, many delicacies are simply lost on me!

I do love Irish Stew. I make it from my Grandmother’s recipe and always marvel at the fact that for such a tasty dish, it contains so few ingredients. It’s a pity that I’ve no idea where the big wrought iron pot my mother cooked in has gone but I can just about replicate the taste using an ordinary saucepan on the stove top.

This is a rugged recipe. I have seen dolled up versions of Irish Stew in restaurants where garlic and cream are added and the vegetables are pared. I prefer this one. It is both simpler and less rich. The meat used is generally a cheaper cut like gigot chops or neck as the bones are needed to enrich the stock.

The dish is assembled in layers and usually not stirred during the cooking process. The pan is sealed and slow cooked so it’s effectively cooked in its own steam. No oil is added.

It’s cooked in an average sized large saucepan. To judge if the size is correct, the meat should cover the bottom of the pan without gaps or overlaps. The recipe feeds 4 and any leftovers make a hearty soup for the next day.

Method
1. Choose enough lamb to cover the entire base of the saucepan you are using without gaps or overlaps
2. Cover the meat with hot water to about 1 inch over meat
3. Season with salt, pepper and a small sprinkle of sugar
4. Put in a layer of roughly chopped onion over the meat
5. Put a layer of chopped carrots over the onions
6. Season with a little more salt and pepper
7. Put a layer of medium sized potatoes on top (these should cover the entire top)
8. Bring to boil and reduce to simmer
9. Place a double sheet of greaseproof paper over top of the saucepan and push lid in to seal
10. Cook slowly at a simmer for about an hour (when potatoes are cooked, it’s done)